Welcome back to THG’s 21-22 season preview. This week, we take a deep dive on the Huskies schedule and I give my way too early prediction as to how they finished. For those keeping track from last year, I guessed that the Huskies would finish 21-12 and they actually ended up with a regular season record of 19-11-2. Hopefully we can get a close guess again this season.

First and foremost, we’ll show an overview of the entire Tech schedule, and then break it down month by month. 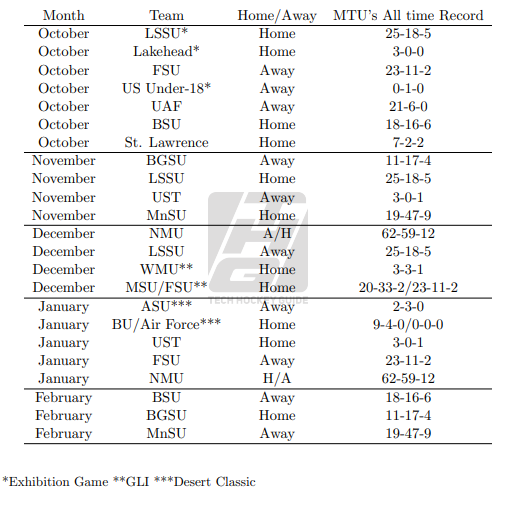 I’m going to preface this by saying that I won’t be taking a guess as exhibition games, so sorry in advance to any Lakehead or USNTDP fans.

This month starts the Huskies off walking as they play relatively weaker teams in FSU, UAF and St. Lawrence. Unlike last year, this new team is entirely unpredictable as to how good they will be after losing some offense and defense. I would aim for a win against the Bulldogs and splits against both the Nanooks and Saints. Though I would put the Nanooks as the toughest opponent out of the three. Finally, there are the Beavers. They find themselves in an awkward position as well, losing all of their top end forward talent from last year. I would expect a split as of right now, but who knows given how drastically different both teams will be.

First up is the Falcons, who are posed to be one of the top two teams in the CCHA this year. They have a large returning group of players and I would expect them to sweep the Huskies. The Lakers should be a relatively even match up and I would expect a competitive series ending in a split. Next up are the two easier calls in the month, Tech should sweep the Tommies and the Mavericks should sweep the Huskies. Since this is hockey something could happen to change those outcomes, but though would be the most likely.

December looks to be a hit or miss month for Tech. The series against Northern should be an interesting one. I would give the advantage to the Huskies due to their systems, NMU hasn’t had good luck against the Huskies lately and I don’t see that changing. Next is likely another split with the Lakers with the holiday break leading to another GLI. In game one the advantage goes to Western and game two depends on who they play. MSU has drastically improved from last year and Ferris is still rebuilding, but is definitely a better team.

This month has Tech making their third trip to the Desert to play Arizona State and/or Boston University and for the first time in program history the United States Air Force Academy. I would guess Tech to either get sweep if they play ASU and BU and split if they play ASU and AF. The month does get easier with two series against FSU and UST where Tech should hold a  3-1 record if all things are going well though I would expect them to be tough series. Lastly is their second stint against the Wildcats. Again, this is more of a systems matchup, but I would guess NMU pulls away with at least one win.

The Huskies end their season with probably the hardest of the five months with their second time playing against BSU, BGSU, and Mankato. I only see Bemidji as the only beatable team with Tech probably splitting. This would leave Bowling Green and Minnesota State to end the Huskies season on an at least four game losing streak going into the playoffs.

You read that right, my way too early season prediction calls for an under .500 Michigan Tech team. There are too many what ifs this year and a 16-18 record feels like a pretty convsertive guess with a CCHA fourth or fifth finish. I see them competing with Bemidji, Ferris, and LSSU with regards to the middle of the pack. Mankato, Bowling Green, and NMU should be the stand out top three in the conference this season in my eyes. St. Thomas may also prove to be able to hang with Tech, Bemidji, and Ferris but it is just too early into the program’s history to truly know.

There is one elephant in the conference I want to address before wrapping up this piece and that is the prediction Flo Hockey made putting LSSU #1 in the CCHA. I wholeheartedly disagree with their prediction. LSSU does have some upside going into this season and I can see them making a push for maybe a #3 spot but they are not better than the Mavericks nor are they in the same league that NMU and BGSU are in terms of pure offense.