Here we are Tech hockey fans, the leaves are starting to show some signs of change and the new ice is down at the John McInnies Student Ice arena. We all know that means that a brand new season of Michigan Tech Hockey is right around the corner. Last year we looked at different aspects of the team leading up to the beginning of the season and this year will be no different to catch you up with the team. Without further ado, here is your annual season preview part 1 focusing on the players.

We covered those leaving via transfers in the State of Tech Hockey article, but this time we also need to include those who have moved on from the program by way of graduation, going pro and transferring.

That is a total of 13 players, and one of the largest groups of players leaving the program in recent history. Additionally, leaving with this group is a loss of 67 goals, 130 assists and total point count of 197. This is a huge loss to this Tech team as those amounts represent 57.3% of all goals, 65% of all assists and 62.1% of all points last season. This is on par with what happened to Wisconsin last season and we all remember how that went for them in the first series of the year against the Huskies. 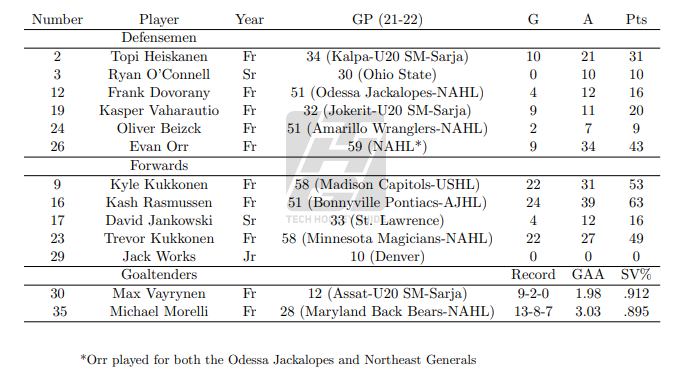 In an alignment of the stars, we see 13 players coming in to balance the loss of players, at least in terms of numbers. Looking at their previous years’ stats we can infer some spots each player may fill. First are the transfer portal athletes that are more or less direct replacements. Players like O’Connell and Jankowski slot into the holes that are left by Karow and Misiak, respectively. With Jack Works coming as a junior, I would expect him to get a good amount of ice time as he was probably hard-pressed for ice time on a very good Denver squad. He put up big numbers in the AJHL just a few seasons ago, which should be reason for excitement for Husky fans.

Next up, we can make a few inferences from a player’s point totals before they entered into the NCAA. We’ll start with the three Finnish players. Heiskanen, Vahrarutio, and Vayrynen all played in U20 SM-Sarja which is more or less the Finnish equivalent of the USHL here in the States. There are cases where some of the top players will play up in the Senior league known as Liiga, but those would be your high NHL draft picks (think Kappo Kakko from the 2019 NHL draft). The good news is all three players performed well in the Finnish leagues, with the bad news being Vahrarutio will miss the season due to injury. I would expect fans to see the other two on the ice this year barring any log jams in the system, which will cause Marcus Pederson to be out of the lineup most nights due to a slow transition to smaller ice and too much competition for ice time.

The US players are next with Dovorany, Bezick, Orr, and  the Kukkonen brothers. As far as the defensemen are concerned, it’s hard to get a good idea from just points alone, but I would expect Orr to be like a Swoyer/Thorne; Dovorany to be like Gotz, and Beizck to possibly be like Russell or Lipe. One thing should be noted Beizck is currently injured and will likely not see much playing time this season.

Moving to the two forwards of Kyle and Trevor Kukkonen, we can get a good prediction on their production. Kyle serves as the main highlight of the incoming class due to his performance in juniors and I would expect a Trenton Bliss like career for him here at Tech. Trevor also did his fair share of lighting up the NAHL, but due to the difference in skill level between leagues, I would expect more form him to become a Nick Nardella-style player from him as far as point totals are concerned.

The last player to preview is the lone Canadian freshman in Kash Rasmussen (who has probably the best first name on the team). He was a huge player in the AJHL and was 16th in total scoring league wide. The AJHL is considered a weaker league, but it has produced many Huskies’ lineup staples including current players Parker Saretsky and Logan Gaine. It would be a fair assessment to assume point totals similar to them, who both amassed similar point totals in that league.

If I were to choose a theme for this year, it would be rebuilding. It’s not that this team can’t be competitive in the CCHA, but compared to last year’s team I don’t see an NCAA berth in their future going into this season. I would project based on roster alone a finish between 3rd and 5th depending on if players are able to step it up and how the new players adapt to the NCAA.

This team on paper has lost a lot of talent on both the offensive and defensive side of things and it is now up to the now upperclassmen to show that they are capable of taking the reins. I would project the lines and pairs to be as follows:

I need to preface this with saying I’m nowhere near qualified to be a hockey coach, but this lineup strikes a nice balance in my eyes, having a skilled top end with some good defensive scoring. Some things that are up for debate are the positions that Saretsky, Ganie and Crespi are going to take in this year’s team. They have been perpetually on the fence of being everyday players and have the skill necessary to crack the lineup and succeed. Maybe this will be the year for them and we could see a totally different set of lines. Next are Mosley and Bonte, who I think have the biggest jobs in the line up trying to fill the hole left by Misiak in terms of being the “motor” and setting the pace of the game. Both are relatively fast and have very good work ethic., making this year their chance to see substantial growth.

Transitioning to the D pairings, I see O’Connell being the new Karow with Thorne taking the slot of Swoyer, leading the defense in terms of points. Orr serves to take Thorne’s old spot, while Lipe slots into Gotz’s role. Finally in the 3rd pairing, Russell has more than earned a spot in the starting six with Heiskanen being an offensive defenseman in his pairing role.

This projection neglects a good number of players making it hard to figure out where they go. Rasmussen, Pederson, Nordstrom, Stauber, and Dovorany could all crack the lineup as well; it is just too soon to tell where they will end up.

Last but not least is the topic of who is in net this season. It should come as no surprise that I project Blake Pietila to be the starter this season. As far as the back up goes, I have been hearing good things about Vayrynen and would expect him to take the torch when Blake moves on from his Huskies Career. Look for Vayrynen to play a game or two this season.

That wraps up the player’s preview. Next up, we will be taking a deep dive at the Huskies’ 22-23 schedule.